Supplier of healthy soft drinks, Calypso Soft Drinks, whose Juicy Water brand AquaJuice loves all things surfing, has put together some little known facts about our beloved sport. Find out what the biggest recorded wave is, the maximum amount of people to stand on a surfboard and where the famous Hawaiian shaka sign comes from!

…which must have been exhausting! The 13-time national Panamanian surfing champion Gary Saavedra took on the 2011 “Canal Cross” challenge and rode a 41.3 mile wave for nearly 4 hours. The artificial wave was created by a power boat. He knocked off Brit Steve King from the top spot who previously held the record at 1 hour and 6 minutes.

1738ft translates to 530 metres – about 500ft taller than the Empire State building and nearly half the height of Ben Nevis! This Megatsunami happened in 1958 in Lituya Bay in southern Alaska and Bill and Vivian Swanson were unlucky (or privileged?) enough to see it with their own eyes from their fishing boat:

“With the first jolt, I tumbled out of the bunk and looked toward the head of the bay where all the noise was coming from. The mountains were shaking something awful, with slide of rock and snow, but what I noticed mostly was the glacier, the north glacier, the one they call Lituya Glacier.

I know you can’t ordinarily see that glacier from where I was anchored. People shake their heads when I tell them I saw it that night. I can’t help it if they don’t believe me. I know the glacier is hidden by the point when you’re in Anchorage Cove, but I know what I saw that night, too. The glacier had risen in the air and moved forward so it was in sight. It must have risen several hundred feet. I don’t mean it was just hanging in the air. It seemed to be solid, but it was jumping and shaking like crazy. Big chunks of ice were falling off the face of it and down into the water.

That was six miles away and they still looked like big chunks. They came off the glacier like a big load of rocks spilling out of a dump truck. That went on for a little while—it’s hard to tell just how long—and then suddenly the glacier dropped back out of sight and there was a big wall of water going over the point. The wave started for us right after that and I was too busy to tell what else was happening up there.”

According to the Guinness Book of Records the most surfers to ever get on the same board was 47.  The surfboard was scaled up to 12m and the 47 surfers boarded at Snappers Rocks, Queensland on 5 March 2005.

Take a look at the YouTube video – it’s a pretty impressive sight!

…or at least a friendly drink! The actual origins aren’t known, but one theory is that it came from Spanish explorers greeting local Hawaiians with the suggestion of a friendly drink which they then misinterpreted as an official greeting. Others say it comes from holding a Hawaiian lei open to put over another’s head in a traditional Aloha greeting.

Huntington Beach in California isn’t just a hotspot for human surfers. For the past five years it’s hosted the Annual Surf City Surf Dog contest to raise money for animal welfare organisations.  Naturally, dogs are judged on their confidence riding the waves and how long they stay on the board. This video should give you a better idea of what actually happens. Note the pro-canine who takes on the waves backwards.

Thanks for enlightening us Calypso!

Want to Book A Surf Lesson With King Surf? 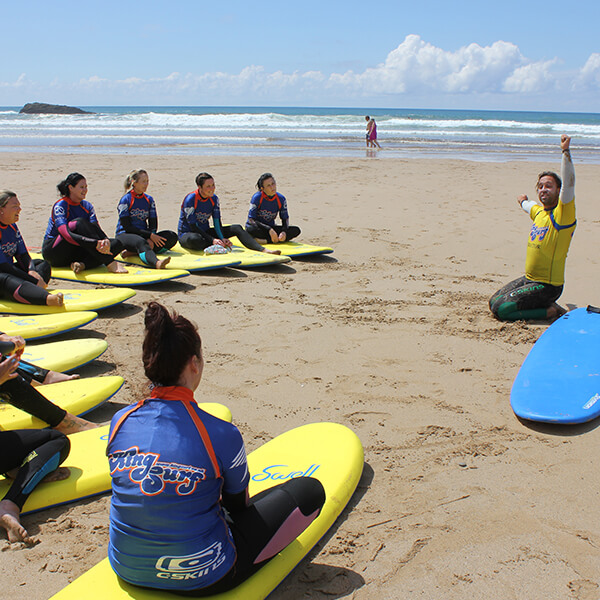